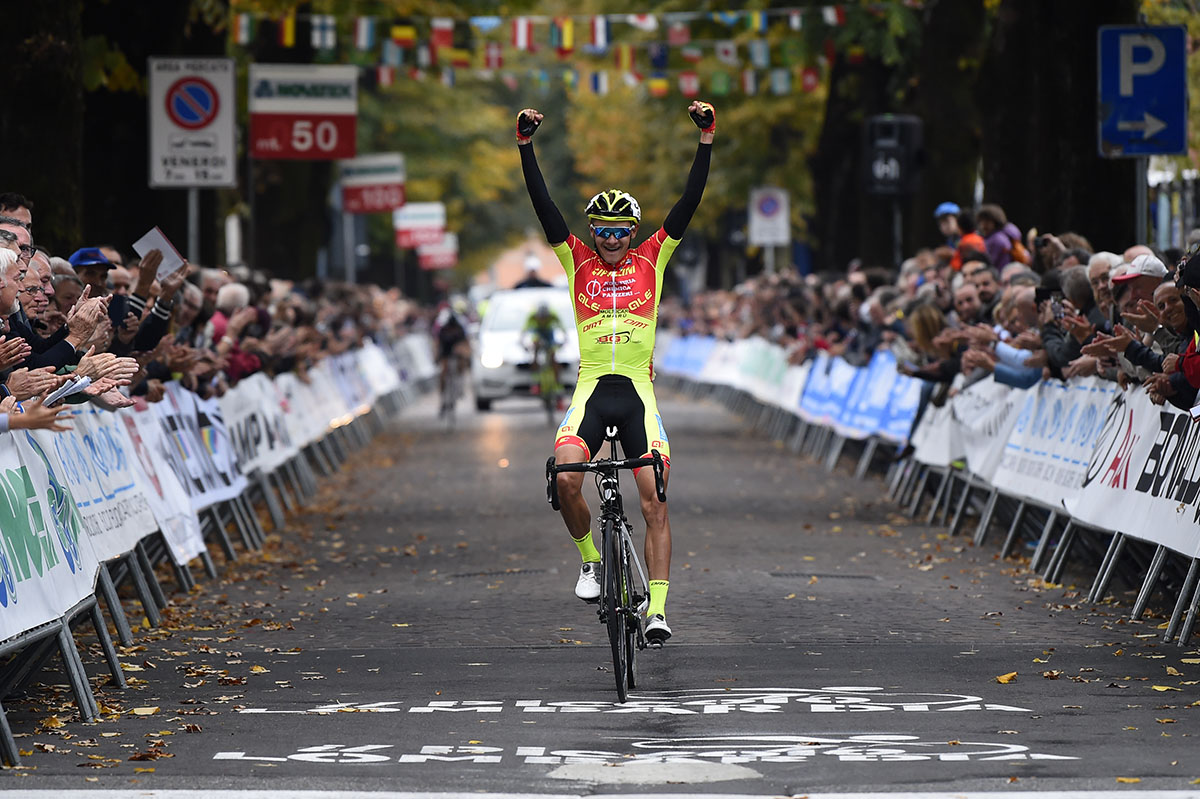 OGGIONO (LC) – the talented Belorussian runner Aleksandr Riabushenko, former European Under 23 champion takes leave from this category winning an important international competition, the eighth of his 2017season. The leader of Palazzago Amarù Team conquered the first place of the 89th Piccolo Giro di Lombardia as he crossed the finish line in Oggiono all by himself. In the last rise of Marconaga in Ello the Belorussian outdistanced the only two racers with whom he was fighting for the trophy: the Italian racer Andrea Cacciotti (Hopplà Petroli Firenze team) got the second place, and the Swiss Gino Maeder (Vc Mendrisio PL Valli Team) conquered the third.

In the Gran Premio della Montagna (Grand Prize of the Mountain) of Ghisallo, Murgari was the first to climb the hill, followed by De Bod and Covili. In the way down, the South African runner Stefan De Bod tried to outdistance not only the 7 racers of the leading group, but also the rest of the participants, which at that moment were all very close, only 18 seconds far. At the 124th kilometer, the runners find themselves all together again.

At the 125th kilometer, the Swiss Gino Maeder (Vc Mendrisio) outdistanced the other participants, followed by Aleksandr Riabushenko (Palazzago Team) and Andrea Cacciotti (Hopplà Petroli Firenze Team). At the 140th kilometer, Maeder, Riabushenko and Cacciotti led the race. When there were only 25 kms left to run, the three leading racers passed under the finish line with 2’22’’ of advantage over the Belgian Emiel Planckaert (Lotto Soudal U23), whereas the rest of the group had 2’50’’ of delay. The Team Colpack tried to chase the trailblazers, but it was too late to catch up.
The three leading runners remained together on the Brianza Hill, whereas the following group behind them start losing its members.
The rise of Marconaga in Ello was decisive to determine the winner of the race: Riabushenko ran the last 6 kilometers alone, triumphantly getting to the finish line in Viale Vittoria, welcomed by the applauding audience.
“I am very happy, I want to dedicate this important victory to my team and to all the staff members of Palazzago Team, who has helped me growing during all these years.”: these were the words of Riabushenko soon after his victory; from the next year on, he will run between the professionals wearing the gear of UAE Team Emirates.