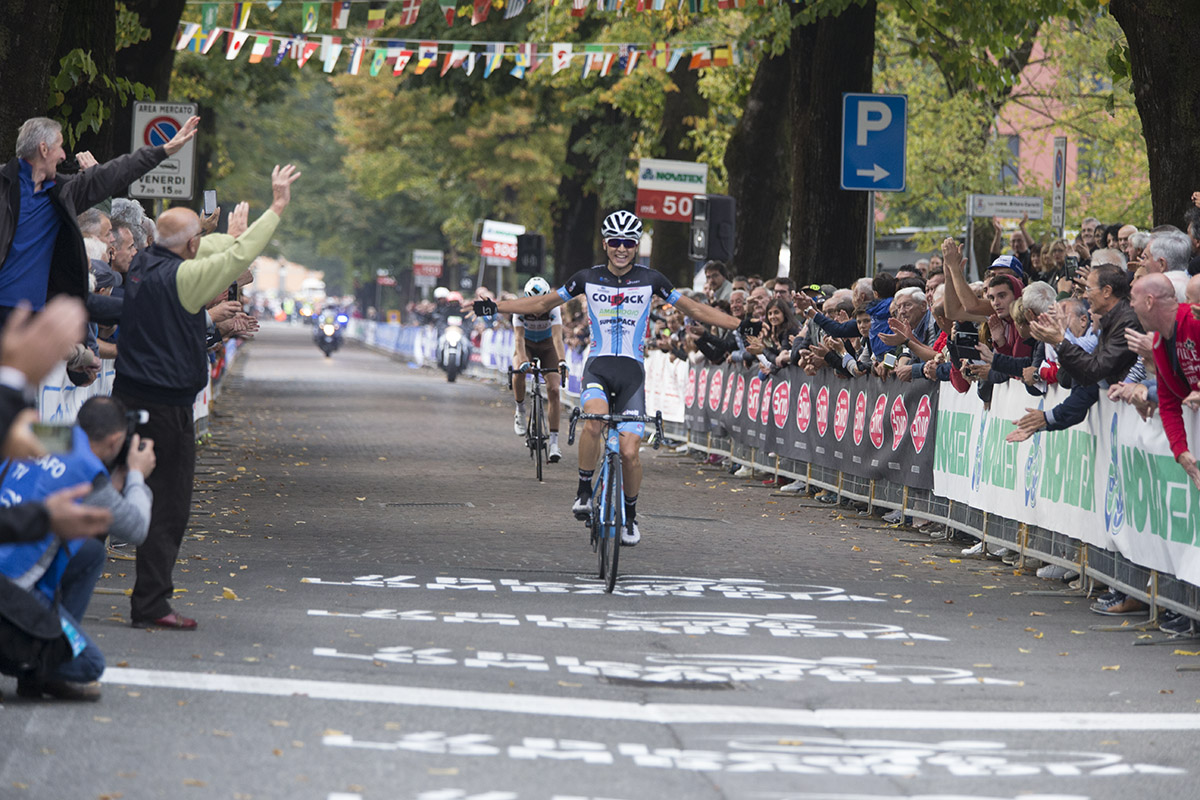 OGGIONO (LC) - Last year he finished second, today he took the greatest satisfaction. Andrea Bagioli wins the 91st Piccolo Giro di Lombardia, the international cycling classic for the Under 23 category which took place in Oggiono (Lecco) and is consecrated as one of the most brilliant talents of Italian and world cycling. The 20-year-old rider of the Team Colpack - who next year will be a pro rider with the Deceuninck - Quick-Step - beat the attacking companion, the French Clement Champoussin (Chambery Cyclisme Formation) in the final sprint. Mattia Petrucci (Groupama - FDJ Continental) completed the podium.

At the event organized by the Velo Club Oggiono, 166 competitors lined up at the start, with the world champion Samuele Battistella in the front row, although not in ideal physical conditions, the European champion Alberto Dainese, the Italian champion Marco Frigo and numerous others national champions and budding champions of the international scene. To travel 176 km with the climbs of Bevera, Sirtori, Madonna del Ghisallo (altitude 754, roof of the competition) and, in the final, the Colle Brianza and the Marconaga of Ello, before the grand finale in Viale Vittoria.

After 25 kilometers of shots and shots, the escape that characterized the first part of the day was born. There are four riders: Luca Colnaghi (Team Colpack), Christian Scaroni (Groupama-FDJ Continetal), Andrea Pietrobon (Zalf Euromobile Désirée Fior) and the Belgian Celestin Leyman (Efc L&R Vulsteke). Their advantage touched the peak of 2'19 ". Around the middle of the race the Seg Racing Academy took the situation in hand and with the forcing, especially the European champion Alberto Dainese, reduced the gap from the breakaway. Holdsworth Zappi's riders also come into action, bringing the group back to just 20 seconds. The group, however, suddenly stops and the treads return to gain.

The cards are shuffled again on the Ghisallo climb when the best group goes back under. He relaunched the solitary action Scaroni and on him are reported Alessandro Covi (Team Colpack) and Samuele Zoccarato (IAM Excelsior) who have since left the platoon. Force the Zoccarato rhythm that detaches the opponents and pass in first position on top of the Ghisallo. In the subsequent descent, the Paduan is captured by the vanguard of the group.

The time comes for the Swiss Joel Suter of Akros Thömus, who immediately gains about thirty seconds on the group in just a few kilometers. In pursuit of the Swiss, 12 riders come out to pick him up at about 23 kilometers from the finish line. From this platoon to the command the inexhaustible Alessandro Covi (Team Colpack) and the Norwegian Torujs Sleen (Uno X - Norwegian Development Team) who take the ascent of Colle Brianza go on the counterattack. The Scandinavian loses contact and then his team-mate Andrea Bagioli, Kevin Colleoni (Biesse Carrera) and Clement Champoussin (Chambery Cyclisme Formation) recover to Covi. Behind the new tread, a quintet is formed with Samuele Zoccarato, Torjus Sleen, Mattia Petrucci (Groupama-FDJ), Einer Rubio (Aran Cucine Vejus) and Attila Valter (CCC Development Team). Ten kilometers from the finish line, only 10 seconds separated the first four from the five immediate pursuers. At 26 seconds 11 other athletes chase, with the bulk of the group now cut off from the victory games.

At eight kilometers from the finish the five pursuers reached the head of the race, but just at that moment Andrea Bagioli (Team Colpack) and Clement Champoussin (Chambery Cyclisme Formation), second and third respectively a year ago in Oggiono, took the lead. The two treads force the rhythm on Marconaga di Ello that catapults them towards the end. Bagioli leaves the bulk of the work to the Frenchman and he saves himself aware of his best quick start. The two enter Viale Vittoria and Andrea Bagioli clearly wins the sprint. Secondo place for Campoussin. Third is the excellent Mattia Petrucci (Groupama-FDJ Continental).