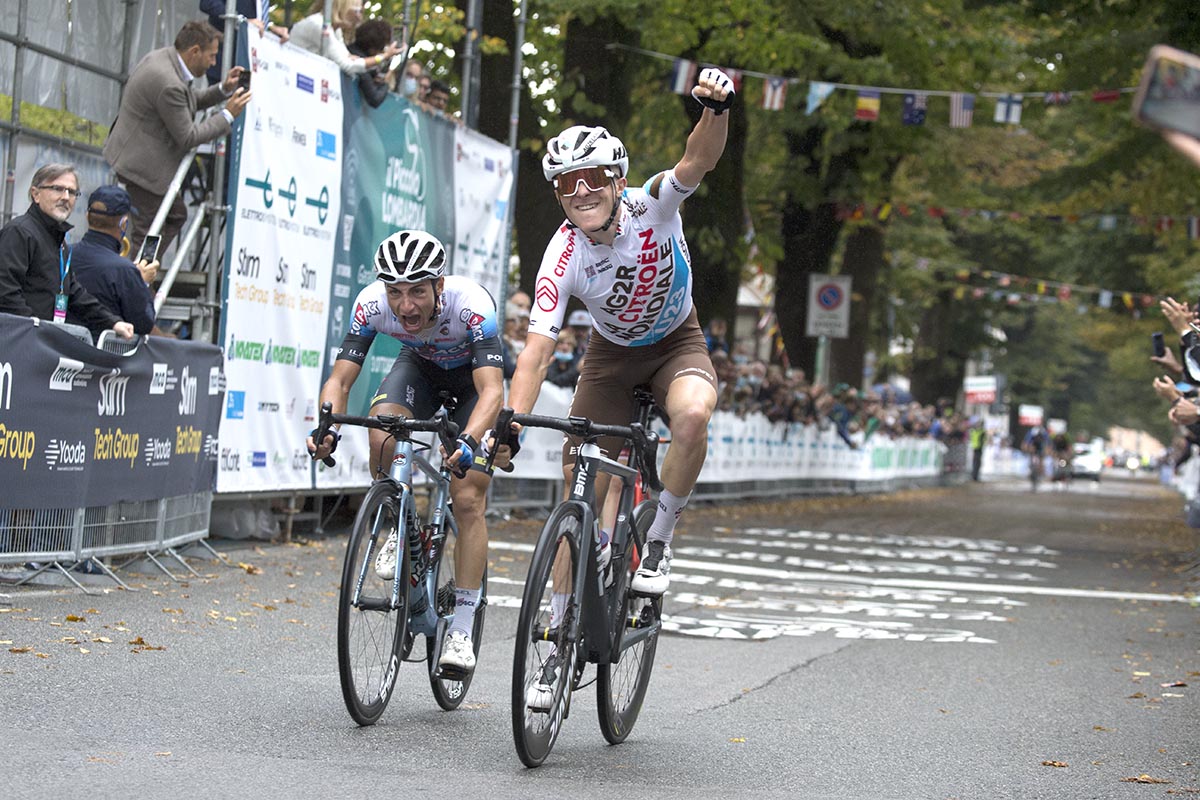 Large public already from the morning in Oggiono, for the teams presentation and attentions mainly focused on the rainbow jersey of the Under 23 World Champion Filippo Baroncini (Team Colpack Ballan). To give the start to the event and to the 113 departing riders the mayor of Oggiono Chiara Narciso with the president of the Velo Club Oggiono, the organizing society, Daniele Fumagalli.

The pace was immediately very fast and after a series of attempts, at km 40, the most important breakaway of the first part of the day was born. Five riders attacked: German Felix Engelhardt (Tirol KTM Cycling Team), Italian Davide Dapporto (Nazionale Italia), Estonian champion Rait Arm (Groupama - FDJ), Rwandan Byiza Renus Uhiriwe (Team Qhubeka) and British Henry Lawton (AG2R Citroen U23 Team). Their advantage first rose to 1'40", then the peloton made up ground, but by the end of the final of the opening four laps around Oggiono the five leaders had a 2'16" advantage over the peloton. A peak of 2'17" was reached at kilometre 91 of the race.

Then the peloton began to make up ground. At the entrance of Bellagio the gap was reduced to 1'11" and in a flash they reabsorbed the fugitives on the first slopes of the Ghisallo climb. In the hardest stretch is the Valtellina Alessio Martinelli (Team Colpack Ballan) to set the pace and to select in the head a group of about twenty riders. At the Gpm passage, accompanied by the classic tolling of the bells of the Sanctuary of the Madonna dei Ciclisti, the rider from Milan Andrea Piccolo (Viris Vigevano) passes in first position.

Among the most active in the group of head there is the German Steinhauser that on the Colle Brianza raises the rhythm and tries to escape, immediately caught by the French Lapeira. In second place, the Italians Petrucci and Galimberti managed to catch up with them. Roda also did well, managing to get back to the front of the race, as did Magli, Clynhens and Roesems.

It is these three athletes who go to play for the victory: the German is the less fast and the sprint is an exciting head to head between Lapeira and Petrucci that rewards the Frenchman who this year had already made his mark in Italy, in April in San Vendemiano.

Great satisfaction of the winner Paul Lapeira: "This is one of the most beautiful races I've ever participated in, I've been trying for three years and it's great to finally win it this year. Today was my last race in the Under 23 category with this formation. From next year I'll start a new adventure among the professionals and I'm lucky to be able to continue racing in the AG2R family. This success gives me even more motivation for the future".

Obviously disappointed the second classified Mattia Petrucci: "I'm very disappointed because I wanted to win today. I knew Lapeira, I knew he was fast but I thought I could beat him, but today he had more. There is little to say. Chapeau to him! I'll come back next year and try again.