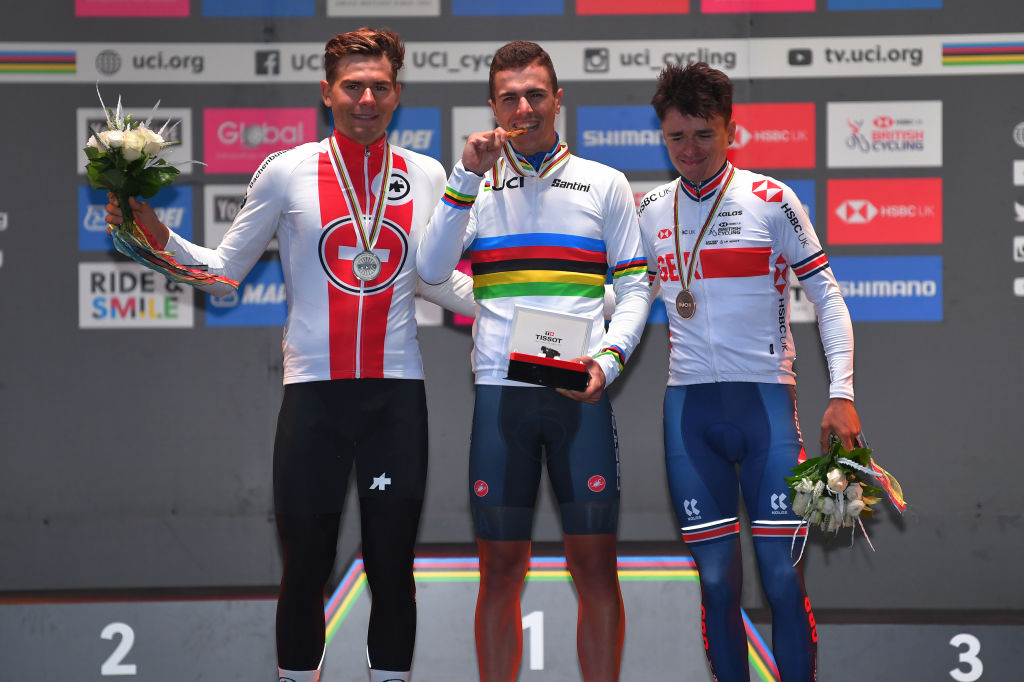 Sunday October 6th in Oggiono among the competitors of the 91st Piccolo Giro di Lombardia, the international cycling classic for the Under 23 category, there will also be the new world champion of the category Samuele Battistella, competing with team Dimension Data for Qhubeka.

Inevitably the spotlight will be on him and his beautiful rainbow jersey that will embellish the already formidable list of young champions who will be protagonists of the event masterfully organized by the Velo Club Oggiono of president Daniele Fumagalli.

But Battistella's will not be just a catwalk. "I want to do well in Oggiono - admits the 21-year-old Vicentine from Rossano Veneto who last Friday at Yorkshire 2019 took the satisfaction of dressing the rainbow jersey on Harrogate's podium with full merit -. I have a pending account with Piccolo Lombardia. Last year I was there with the first and then a mechanical problem in the end prevented me from being able to play the victory". In 2018 Battistella had also won the KOM of the Madonna del Ghisallo.

"This year - continues Battistella - I return with the jersey of world champion on the shoulders and therefore I have an even more important motivation to try to do well and close my season in style. The Piccolo Giro di Lombardia is certainly the most prestigious race of the finale season, the course is hard, selective, very long and therefore well suited to my characteristics. I am aware, however, that competition is already very high in itself, then for me now with this shirt on my shoulders it will be even more difficult to surprise opponents. I will be even more recognizable in a group and I will have the attention of all focused on me”.

The last Under 23 world champion to line up at the start of the Piccolo Giro di Lombardia in 2013 was Matej Mohoric, although at that time the race was included in the Elite and Under 23 calendar and the Slovenian could not wear the rainbow jersey in the race. Today the world champion is Samuele Battistella, what is the effect? "At the Piccolo Giro there are always athletes of great value and those who in recent years have worn the Under 23 jersey have always collected excellent results even among the pro. I hope one day I too can carve out a space at the top of cycling ”.

The last Italian to win an Under-23 World Championship was Francesco Chicchi at Zolder in 2002. Seventeen years later, the case has it that the Tuscan is just the sports director of Dimension Data for Qhubeka, the team of the new world champion Battistella.

THE RACE - The meeting for the preliminary operations and the verification of the licenses is scheduled for Sunday 6th October from 8 am in the headquarters of the Bank BCC Brianza and Laghi of via Lazzaretto 15 / A in Oggiono. From 10.30 am the presentation of all the participating teams in Piazza Manzoni. The official start will be given in Viale Vittoria at 11.55.
In total the competitors will have to travel 176 km, drawn between the provinces of Lecco, Como, Monza Brianza and Bergamo. The protagonists of Lombardia baby will have to face the climbs of Bevera, Sirtori, Madonna del Ghisallo (754 altitude, the competition's roof). In the final passages on Colle Brianza (going up to an altitude of 588) and Marconaga di Ello will be decisive. Arrival is in Viale Vittoria around 4.15pm.

LIVE STREAMING - On Sunday 6th October it will be possible to follow the Piccolo Giro di Lombardia also in live video streaming thanks to the production of BICITV in synergy with the Velo Club Oggiono. From 10.30 to 12 for the preliminary stages and from 14.30 to 16.30 for the main stages of the competition, it will be possible to follow the live streaming on the website www.bicitv.it, on the BICITV Youtube channel, on the BICITV Facebook page and on the Piccolo Giro di Lombardia Facebook page.
On TV on TeleUnica digital terrestrial Channel 12 (Lecco) - Channel 193 (Sondrio and Lombardy).