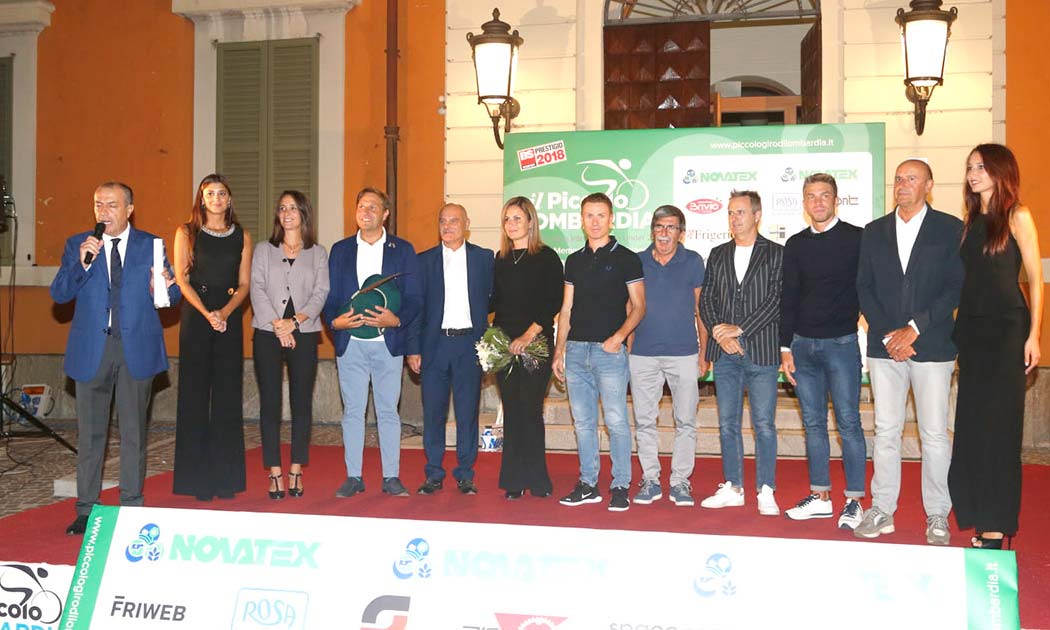 OGGIONO (LC) - The 90th Piccolo Giro di Lombardia was officially presented last night in Piazza Garibaldi in Oggiono, in the province of Lecco. The prestigious international cycling class for the Under 23 category, which will take place on Sunday 7 October, is 90 years old. Ninety years of history and passion and a myriad of young champions launched to the world of professionals. For the ninth consecutive year the event is organized by the Velo Club Oggiono chaired by Daniele Fumagalli who, with all his staff, edition after edition, has increasingly increased the prestige and organizational quality of the event now recognized as one of the best internationally .

THE BEST TEAMS OF THE WORLD - The quality of the teams and the young champions that every season presents themselves at the starting line confirm this. And this year among the invited teams there will be 17 foreign teams among the best in the world of the Under 23 category, with different branches of the WorldTour teams and all the best Italian teams. The complete list is still being defined and in the coming weeks the actual list of the teams that will line up at Oggiono on Sunday 7 October will be revealed.

CYCLING AND TERRITORY - President Daniele Fumagalli during his speech in front of the numerous audience that crowded the square underlined: "This to take charge of the organization of the Piccolo Giro di Lombardia nine years ago was a gamble. We have committed ourselves and passion and from year to year we have been able to improve and do things well thanks to the support of the municipal administration, the sponsors and all our volunteers. This year we chose the green color as dominant of the graphic line from our run. Green as our beautiful region of Lombardy and also within the official brochure we wanted to include several images of the beautiful landscapes of our territory and that our race seeks to enhance. Finally - concluded the president Fumagalli -, we will always be giving away the Giorgio Frigerio Memorial and this year with the Gpm ranking we will remember Alessandro Corti. Two friends that we always carry in our hearts and left us too soon ".

DAMIANO CUNEGO SPECIAL GUEST - Announced in recent days as the godfather of the event, the most anticipated guest of the evening was Damiano Cunego, professional cyclist since 2002 and that this year he decided to end his brilliant career: he can boast in his own palmares, among others, a victory of the Giro d'Italia in 2004, three successes at the Giro di Lombardia (2004, 2007 and 2008), an Amstel Gold Race (2008) and a silver medal at the Varese World Championships 2008 The Veronese champion praised the Velo Club Oggiono for the organization and said: "This is a beautiful race among the most important and difficult for the amateur category. This is demonstrated by the prestige of the roll of honor and the names of the many champions who have passed from here. I never managed to win it because with the team at the time was never in our main goals, but it is a race that I always liked. Let's say that I then started again as a professional, winning three times the Giro di Lombardia dei grandi ". And in the modern era Damiano Cunego is the runner who holds the record of personal victories in the Classica delle Foglie Morte (Fausto Coppi had won it 5 times between 1946 and 1954).

AUTHORITIES AND GUESTS - Among the other guests and the authorities intervened during the evening conducted by the journalist and speaker Alessandro Brambilla, were the Lombardy Region Councilor for Sports Martina Cambiaghi, for the Federciclismo the national vice president Michele Gamba, the vice president vicar of the Lombard Committee Fabio Perego and the president of the Provincial Committee of Lecco Alessandro Bonacina and of course, to do the honors, also the honorable Roberto Paolo Ferrari mayor of Oggiono who expressed all his joy for the strong bond that has created between the city of Oggiono and the Piccolo Lombardia: "The Velo Club has allowed our Oggiono to become known in the world not only in that of cycling. And I am proud that as an administration we have managed to support the organization of such a glorious race. Since 2017 we have been able to boast of the title of city and among the basic requirements required by the Presidency of the Republic also plays an important role in the sport and tradition that has been created in these nine years between our community and the Piccolo Giro di Lombardia certainly its part to reach this prestigious goal ".
Guests of the evening also the professional athletes of the BePink Brianza training: the Dutch Nicole Steigenga, Francesca Pattaro and Paola Panzeri received a floral tribute from the organizing committee was also present by the oggionese cyclist Marco Molteni who will participate in the race with his team Iseo Serratura Rime. THE ROUTE - All confirmed as in the last editions regarding the race route of the Piccolo Giro di Lombardia 2018. "For some years now we have found the square with a beautiful and challenging route that traditionally brings out a quality runner who then he will also hear about the professionals ", explained President Fumagalli. The kilometers to go will be 174, 700 with departure and conclusion to Oggiono. The protagonists of Lombardy baby will have to face the climbs of Bevera, Sirtori, Madonna del Ghisallo (altitude 754, roof of the competition). In the end the passages on Colle Brianza will be decisive (up to 588 meters high) and in Marconaga di Ello. Four provinces involved in the event: Lecco, Como, Monza Brianza and Bergamo. The competitors will be presented in Piazza Manzoni in Oggiono between 9.30 and 11.45 and the classic will start at 12.00. The arrival is scheduled in Viale Victoria around 16.15.