Presented Il Piccolo Lombardia 2021, the race that wants to become even bigger 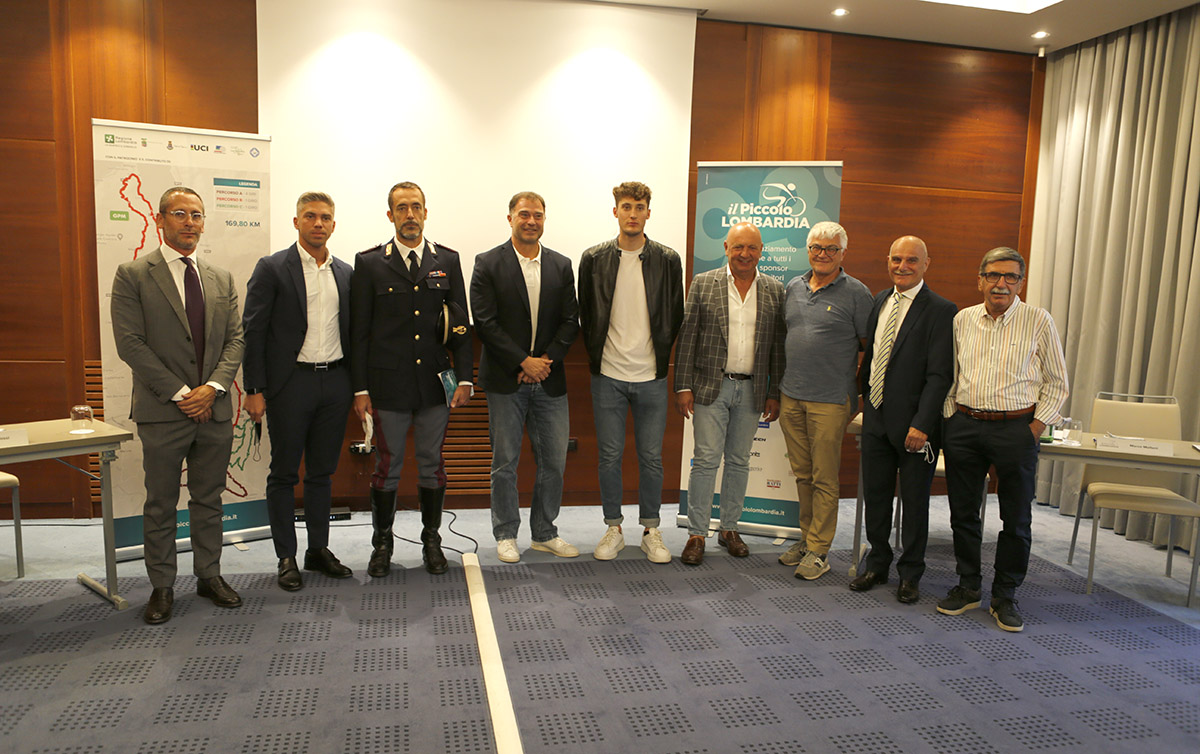 The veil has been officially removed from the 93rd edition of the Piccolo Lombardia, the international cycling classic for the Under 23 category, scheduled in Oggiono (Lecco) on Sunday, October 3, 2021. The presentation was held in the Manzoni room of the NH Hoteles in Lecco.

The event, organised by the Velo Club Oggiono, is one of the most important appointments at international level, a race that every year attracts to Lombardy the best athletes and the best teams in the world. Cycling talents ready to win a prestigious race and try to take flight into the great world of professionalism. The roll of honour speaks for itself with young people who have gone on to write the past and recent history of cycling.

To open the series of interventions, moderated by the speaker of the Giro d'Italia Paolo Mei, was the president of the Velo Club Oggiono Daniele Fumagalli: "Ninety-three editions of this race, we have acquired this right since 2009 and we have always organised it continuously. We put it on the field last year too, despite the dark period we went through because of the pandemic. For us, continuity is a fundamental element. Being present every year means taking this race to ever higher levels. This year, too, we have encountered many difficulties, but thanks to the commitment of all my staff, we have managed to overcome them and are ready to experience another great edition".

Antonio Rossi, Undersecretary for Sport, the 2026 Olympics and Major Events of the Lombardy Region, stressed: "Lombardy is a land of cycling. From the final arrival in Milan and the beautiful stages of the Giro d'Italia, to the Giro di Lombardia, the Trittico Lombardo. There are many races that bring great teams and attract thousands of fans to our land. The Piccolo Lombardia is also one of the great events on which the Lombardy Region is focusing to make our land known and promote sport and its values".

Regional councillor Mauro Piazza also spoke: "It is an honour for the Lombardy Region to be at the side of such an important event. For us it is a great showcase and cycling is a sport steeped in values that are key to our society. Congratulations to the organisers and good luck to all the participants".

The president of the Lombardy Committee of the Federciclismo Stefano Pedrinazzi: "The Piccolo Lombardia is the reference race for everyone. For our Lombardy Committee it is a feather in our cap, it is our pearl. It is the most important race at national level, for the quality of the riders and teams at the start, for the route and also for the beauty of the landscape. The Velo Club Oggiono is one of the best prepared companies in the organisational field and since they took over this organisation, the race has made a very important leap in quality. Having at the start about fifteen foreign teams means to have a positive feedback also abroad and says a lot about the quality of these organizers. We can only say thank you to them".

The president of the FCI Lecco Alessandro Bonacina added: "For our Committee is a pride to have on the territory such an important race, I thank and congratulate all".

Among the new partners of the event also the Onlus "Cancro Primo Aiuto". Its managing director Flavio Ferrari said: "This year, next 9 October, we will organise with the collaboration of the Velo Club Sovico and the Velo Club Oggiono a cycling event on the track of the Monza Autodrome called 'Santiago in Rosa'. Like all our initiatives, it will combine sport and solidarity with fundraising. We have recently approached cycling and it is a world in which we have found many affinities".

Member of the organizing committee, also the former rider Marco Molteni who said: "I thank Daniele Fumagalli and the whole society of Velo Club Oggiono for giving me the opportunity and the pride to be able to continue to put the same commitment and passion that I put on the bike even in the organization of this race so important. Molteni himself illustrated some of the innovations that also concern the events surrounding the race: "We will have a new stage for the presentation of the teams in the morning and the entertainment, there will be a maxi-screen and we will set up an exhibition village with annexed hospitality area and also a small street-food with animation to entertain the public, authorities and sponsors. We thought of all this to create an event within the event and to gather all the entertainment in one place to make it less dispersive".

Naturally, thanks were also expressed to all the sponsors who make this event possible. In particular, Elrttrosystem, Novatex and Stim Tech Group. On behalf of Elettrosytem, Giuseppe Giussani said: "Thanks to Velo Club Oggiono, thanks to its president Daniele Fumagalli who always has dreams and if we all work together in synergy these dreams come true. We local companies are also right to support initiatives such as these, which are born of passion and bring prestige to our land".

As already announced in recent days, important news also concern the route. Due to logistical problems related to the concomitance with the administrative elections, this year we will have to give up the climb of Villa Vergano.
The initial section proposes four laps of a circuit around the Oggionese area with the climb of Bevera di Sirtori to be tackled four times.
Confirmed the legendary climb to Ghisallo (after about 121 km) that will probably give a first skim to the group and then in the final will be Ravellino (Colle Brianza) and especially the usual Marconaga di Ello (located just under 6 km from the finish) to act as a springboard to the finish line of Oggiono and to bring out the talent of the best.

This year there will also be a change in the meeting place and for the preliminary operations and licence verification which will take place from 8.00 am in the Council Chamber of the Municipality of Oggiono in Piazza Garibaldi, 14. This will be followed from 10.30 by the presentation of all participating teams. The official start will be given in Viale Vittoria at 12 noon.
In total the competitors will have to cover 169.8 km. The arrival is expected around 4 pm in Oggiono.

Present also the professional cyclist Filippo Conca, athlete of Lotto Soudal and who has been among the protagonists in recent editions of the race. He expressed himself on the new route: "I think this change of route is positive, because without the 'Alpino' kilometre, this year the race will be more open for a greater number of athletes, even in the last ten kilometres, before the Marconaga di Ello. A lot will also depend on the weather and bad weather, as happened last year, could favour the arrival of a breakaway from afar".