DEPARTURES AND ARRIVALS FROM THE BIG CITY TO OGGIONO, THE NEVERENDING STORY OF PICCOLO GIRO DI LOMBARDIA. 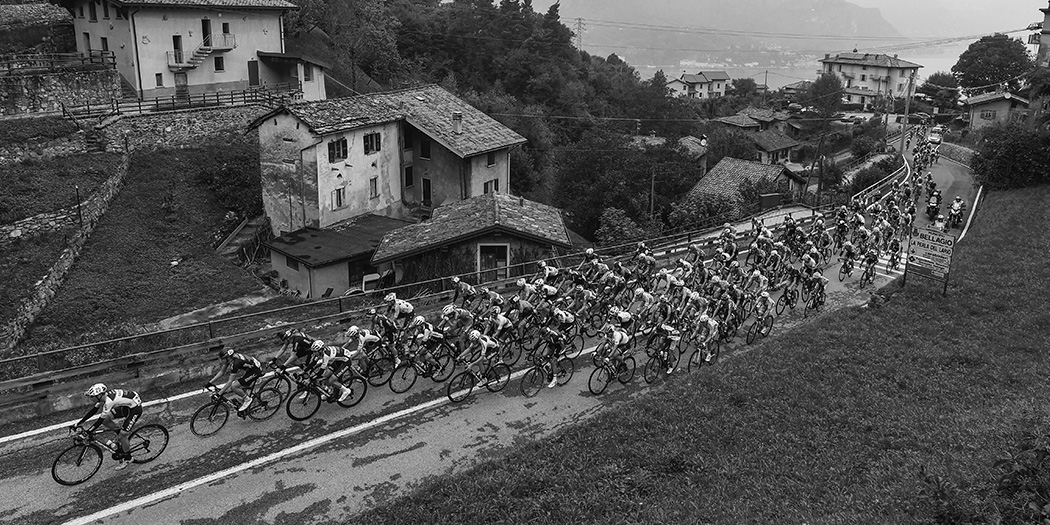 The Piccolo Giro di Lombardia was born in 1911, six years after the tour reserved to the professionals. It was the Unione Sportiva Milanese (the sporting union of Milan), with its headquarters in Milan, that organized the first edition of the tour. The Piccolo Giro di Lombardia reserved to dabblers has always been carried out before the Grande Lombardia (the Big tour of Lombardy). At the beginning, the route of Piccolo Giro crossed the districts of Como, Varese and Bergamo to end in Sesto San Giovanni, in the suburbs of Milan. Not even the First World War cancelled the Piccolo Lombardia.
In 1919, the rise from Regatola in Bellagio to Ghisallo was inserted in the route of the Tour of Lombardy reserved to the professionals. The tour of Lombardy for dabblers copied from them: the Unione Sportiva Milanese added the same rise to the route of the Piccolo in 1920, and Ghisallo became the symbol of the tour for amateurs. The following editions have never given up the most famous rise in the Lariano triangle. Long moments of glory, but also of trouble and dismay, have always distinguished the story of the Piccolo Giro di Lombardia.

In 1924, the Unione Sportiva Milanese decided to give up the label and its rights to the Unione Ciclo Auto Moto, best known as ‘UCAM’, which has its headquarters in Milan, in Corso Porta Nuova, nr 40. The UCAM worked intensively on the route and on the organizational innovations: thanks to its work, the small tour of Lombardy became the symbol of the amateur sporting scene. Also during the 30s and the 40s, the route of the race used to start in Milan, to cross Ghisallo and to end in Sesto San Giovanni. The layout used to change quite often, with Ghisallo always being the key point of the tour.

In 1949 the Madonna of Ghisallo was declared Saint protector of the cyclists of the world, also thanks to the tour for amateurs, who had contributed to draw the attention of the public to the peak of the above mentioned mountain. After the Second World War, the UCAM and other societies gave up the activity because some of their leaders had died in the conflict. At this point the Bruzzanese, a big society with its headquarters in the suburbs of Milan, intervened to give its help. Its t-shirts were yellow, as its historical founder, Eugenio Rimoldi, had indicated. The Bruzzanese organized the Piccolo Giro di Lombardia with passion and competence for 40 years. In 1955 the Bruzzonese merged with Brill, a leading company in the production of shoe polish.

The Bruzzanese-Brill then often changed the town of the finish line, to meet the requirements of its famous partner: Cusano Milanino, Paderno Dugnano, Novate Milanese, Incirano di Nova Milanese. The edition of the Piccolo Giro of the 1st October 1989 has been the last to end in the district of Milan, specifically in Incirano di Nova. Thanks to an inspired hunch of few managers of Como, in 1990 the small tour moved to Como, with the starting point and the finish line in Cavour Place. The organizing association was the Velo Club Oggiono, which for the next two editions moved the starting and the finish lines to Erba. From 1993 on, the Gruppo Sportivo Lario became the owner of the international ranking for ‘first and second series amateurs’. The Elites and Under 23 categories have been taking part to the Giro since 1996.

1998, Giorgio Roncoroni and Lario took back the Lombardia tour to Como. The edition of 4th October 2008 was the last to end in this city, with the finish line located in Via Lungolario Trento. In 2009 the race didn’t take place.

But the rankings are God’s children, and also the small tour of Lombardy is: thanks to Velo Club Oggiono, this race will shine bright again. Athletes, take note: 2nd October 2010 has been the start of a new era of the Piccolo Giro di Lombardia, starting and finish lines in Oggiono. For the first time, the small tour of Lombardy will start and finish within the territory and district of Lecco. And the story of the “classical monument” will continue to offer racers and amateurs many more moments of glory.
2021 edition timetable
General altimetry
General planimetry edition 2021
Planimetry - Route A
Planimetry - Route B
BOOK 2021
Planimetry - Route C
2021 rule book
2021 press accreditation form
Self declaration COVID-19
Participants list