Presented the 91st Piccolo Giro di Lombardia: the race that launches the champions of tomorrow 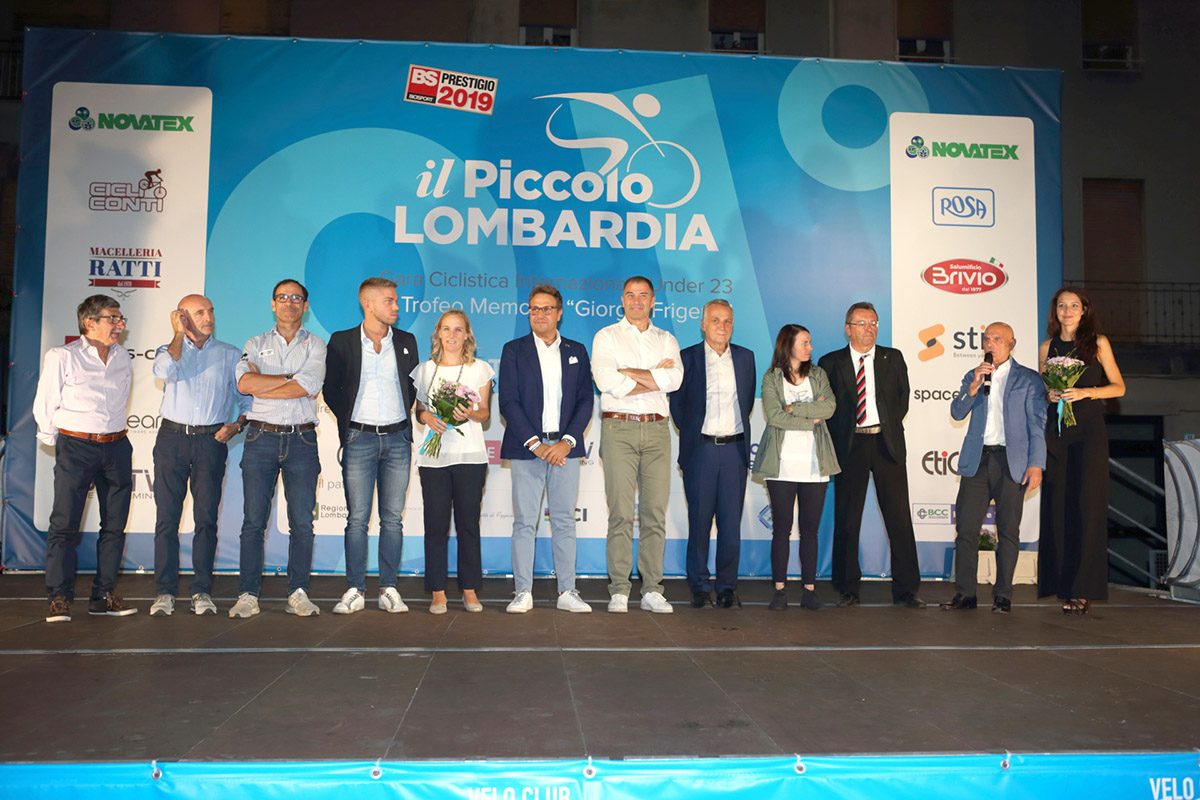 OGGIONO (LC) - The elegant setting of Piazza Manzoni in Oggiono, with the public of special occasions, hosted last night the official presentation of the 91st Piccolo Giro di Lombardia, the classic of international cycling for the Under 23 category scheduled in Oggiono (Lecco) Sunday 6th October 2019. There will also be the 5th Memorial Giorgio Frigerio.

Guest of honor of the show the CT of the Italian National team Davide Cassani that during his speech immediately underlined: "It is enough to leaf through the gold book of this race to realize what it represents and how many champions have passed from here. It is a challenging race, with a high rate of participants and it is no coincidence that if the winner here then becomes a pro rider. I have to congratulate the organizers because they had the skill to bring back a race that is very important for the whole Italian and international cycling movement ".

The city of Oggiono, therefore, will return to being the capital of international cycling welcoming the best talents in the world of the Under 23 category. The organizational direction is always signed by Velo Club Oggiono with president Daniele Fumagalli in the lead. "We are excited - said the president -, this has become a very important competition and we are happy that this year too many foreign teams have applied for participation and it is a certificate of esteem for our group and all the people who are behind this organization ".

Among the authorities intervened, the former Olympic canoe champion Antonio Rossi, now undersecretary of the Lombardy Region's major sporting events: "This is a beautiful event that also highlights the beauty of Brianza. Here in Oggiono I consider myself to be at home and I could not miss ”.

The mayor of Oggiono Chiara Narciso added: “Piccolo Lombardia is an important event for our land and for the whole Oggiono community. We live closely the organization of this event and therefore I have to congratulate President Fumagalli and all his staff for the great work they are doing ”.

The former mayor and now Member of Parliament Roberto Ferrari said: "Beautiful to see this square again packed for the presentation of this cycling competition which is a flagship of our city. Young people, sport and the territory are three elements that make Piccolo Lombardia a great cycling event ”.

THE ROUTE - There will be 176 kilometers to go with starting and finishing in Oggiono. The protagonists of baby Lombardy will have to face the climbs of Bevera, Sirtori, Madonna del Ghisallo (754 altitude, the competition's roof). In the final passages on Colle Brianza (going up to an altitude of 588) and Marconaga di Ello will be decisive. Four provinces are involved in the event: Lecco, Como, Monza Brianza and Bergamo. The competitors will be presented in Piazza Manzoni in Oggiono on October 6th between 10.30 am and 11.45 am and the classic will start at 12.00 am. Arrival is in Viale Vittoria at around 4.00 pm Prizes to be followed in Piazza Manzoni.

DIRETTA STREAMING - One of the main novelties of the 2019 edition of Piccolo Lombardia is the live streaming of the race which will be visible on the website www.bicitv.it and on the social channels Youtube and Facebook of BICITV. Teleunica (TV channel 12 of the DTT for Lecco and Sondrio and 193 for Lombardy) will also broadcast the live broadcast of the event. Furthermore, a maxi-screen will be installed in Piazza Sironi to allow even the public on site to follow the live broadcast. A synergy wanted by the Organizing Committee also to expand its horizons more and more on the international scene.


On the official website of the event it is possible to see all the details of the route: www.ilpiccololombardia.it